Dr. Tuncer Cebeci has made a gift of $25,000 to Summit School to establish an endowment fund in memory of his late wife, Sylvia Holt Cebeci, a Summit School alumna from the class of 1956. Dr. Cebeci, a resident of Long Beach, CA, has designated that this endowment provide financial aid to a Summit student whose family may not otherwise be able to afford a Summit education. Click here to make a gift in honor of Sylvia Holt Cebeci '56.

“My wife was grateful to Summit for giving her the academic foundation to qualify for a merit scholarship to Duke University,” Dr. Cebeci said. “I met Sylvia when we were both students at Duke, and I feel like I owe our 49-year marriage to Summit.”

“I have been successful in my career; it is now my pleasure to give back and provide a student with a strong educational start,” Dr. Cebeci added.

Born and raised in Turkey, Tuncer Cebeci graduated from Robert College, Turkey, with B.S. degrees in electrical and mechanical engineering. He came to North Carolina to receive his M.S. degree in mechanical engineering from Duke University. In 1961, he also found himself in love with an undergraduate student from Winston-Salem named Sylvia Holt.

Cebeci and Holt were married in 1963 at New Hope Methodist Church in Winston-Salem. He received his doctorate in mechanical engineering from North Carolina State University (NCSU) in 1964 and joined Douglas Aircraft Company, in Long Beach in 1965 as a research scientist. He was promoted to become the head of the aerodynamics research department in 1974 and to become first senior fellow in the company in 1982. 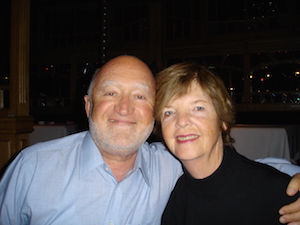 In 1998 he founded the aerospace engineering department at California State University in Long Beach and became the chairman of the department. He is an author of 20 books and more than 300 published technical journal articles.

He retired from California State University in Long Beach in 2000 and from Boeing in 2004, at which time he was the highest ranking engineer in a company of more than 200,000.

Dr. and Mrs. Cebeci traveled the world and raised two daughters and one son. When Sylvia passed away in May 2012, Dr. Cebeci wanted to remember her in a lasting and meaningful way.

This scholarship in her name will be funded from the interest generated from the principal initial gift of $25,000. It is Dr. Cebeci’s hope that he and others will add to this fund, enabling the annual scholarship amount to increase over time. Click here to make a gift in honor of Sylvia Holt Cebeci '56.