I had a dream school in mind... where everybody could be a somebody.
~Louise Futrell, Founder of Summit School

Summit School was founded in 1933 on many of the principles of progressive education that continue to underpin the school to this day. Louise Futrell, the school's founder, created a program of active learning, individualized instruction, and attention to the whole child. To her staff, Miss Futrell often said, "until a child has learned, you have not taught." 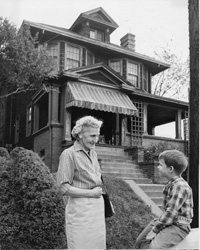 Summit began in a large home on Summit Street in the West End section of Winston-Salem, but quickly outgrew its quarters and began to overflow into nearby facilities. In 1944, Mrs. Charles Babcock, daughter of Mr. and Mrs. R. J. Reynolds, offered the school a 4.5-acre plot of land on her Reynolda estate near Reynolda Village. In 1945, construction began on a new building, its design inspired by an exhibit mounted by The Museum of Modern Art and showing the potential of modern architecture in a school setting. The new campus opened in 1946.

Summit's Theatre (now the Loma Hopkins Theatre) played host to many productions of the North Carolina School of the Arts (now UNCSA) in the early years of that institution. Summit was among the first schools in the area to use computers in the classroom, and pioneered an experimental math program in the 1970s and 1980s that brought teachers to the school from all over the nation to learn new ways of teaching math.

In 1990, Sandra Adams became head of school, serving until her retirement after 40 years of teaching and administrating in 2008. Under Dr. Adams' leadership, the school built a new three-story Library and began construction on four new buildings–a Second and Third Grade Building (2008), an Athletic Center (2008), an Arts and Technology Building (2009), and Dining Hall (2009)–nearly doubling the square footage of the educational space.

Dr. Michael Ebeling became head of school in 2008, and under his leadership the school realigned divisions in 2009 to create a Lower School (JrK-5) and Upper School (6-9). After a careful self study in 2008-2009, determining the strengths of the school, its program, its students, and its staff, Summit stated its Six Promises, as a tribute to where we have been, where we are, and where we are headed in the future. Louise Futrell once said of Summit, "I had a dream school in mind, where everybody can be a somebody." Now, 85 years later, that dream is still alive at Summit School.

Learn more about the roots of Summit School from this video featuring Founders' Day.

Our planning for the 2020-2021 school year is well underway and we intend to begin on our scheduled date of August 25 (as noted in our Key Dates Calendar) on campus.

In the coming weeks and throughout the summer we will be providing increasingly detailed information regarding our Re-Entry Plan for the 2020-2021 school year.